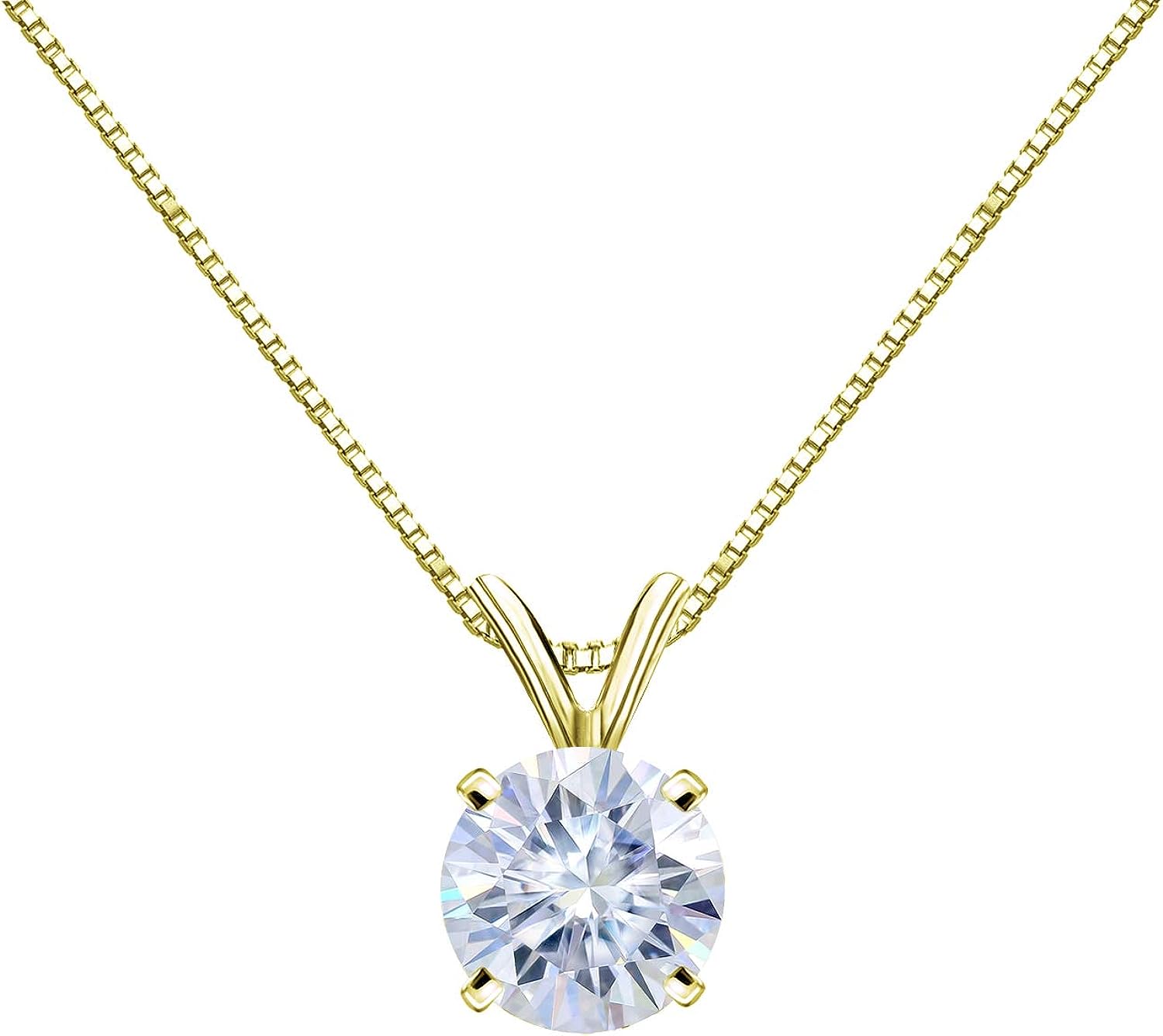 A dazzling Round Solitaire Moissanite Necklace by Diamond Wish available in your choice from 1/2ct to 3 1/2ct TGW. The Moissanite is set in your choice of 14K Yellow Gold, White Gold or Rose Gold in a 4-prong basket setting. The pendant suspends gracefully from an Adjustable 16 to 18-inch box chain that fastens securely with a spring-ring clasp.

**Images are Enlarged to Show Detail**

Moissanite is a popular gemstone alternative to a diamond, it was originally discovered by a French scientist named Henri Moissan in a meteor crater the fell to the earth and landed in Arizona in 1893. He initially thought that he had discovered diamonds, but later determined that the crystals were composed of silicon carbide. Due to its rarity, moissanite available today is laboratory-created. After many years of trial and error, the particles Moissan discovered were successfully synthesized to produce moissanite gemstones that have quickly become one of the world’s most scintillating gemstones.

Why Would I choose Moissanite over a Diamond?

Moissanite is nearly identical to earth-mined diamonds, but Moissanite by Diamond Wish, is environmentally and socially responsible, it makes a stunning alternative to a diamond, is much more affordable and possesses an unrivaled sparkle and fire.

How do you tell the difference?

Although Moissanite looks a lot like a diamond and is engineered to give the illusion of similarity to diamonds, most people cannot differentiate the two. Even experts often require special equipment to tell the two apart. Moissanites have a high refractive index giving the moissanite a greater sparkle than that of a diamond and due to its faceting pattern, it emanates light in every direction. The bigger the moissanite stone, the more prominent the sparkle.

Is Moissanite as durable as a Diamond?

A diamond ranks supreme as one of the hardest natural substances on the planet (a 10 on the Mohs scale of hardness), however, Moissanite is not far behind it (9.25). It is the second hardest gemstone used in jewelry and is harder than other popular engagement ring gemstones such as sapphire (9), ruby (9) and emerald (7.5 to 8). Like a diamond, Moissanite is also scratch and heat resistant making it an ideal choice for every day wear.

How is Moissanite Graded?

Moissanite is not graded on the GIA color scale, it is available in near colorless and eye-clean there are possible inclusions however, they are not visible to the naked eye and do not affect the clarity of the stone.

Is Moissanite ethically sourced and Conflict-Free?

The Moissanite offered by Diamond Wish is made in an environmentally and ethically responsible lab, Created moissanite has a much smaller carbon footprint resulting in less of an environmental impact with traceable origins so you can be assured that your stone is ethically sustainable and conﬂict-free.

Our fine jewelry is designed, handcrafted and assembled all in the USA. We have the entire process happening right here in front of us, from handpicking the stones by our expert gemologists to hand-setting them by our team of skilled setters. This gives us complete control over the quality,craftsmanship and the finishing. We are able to work with quick performance, shorter delivery time, timelier inspections and a well-made piece of jewelry.

Located in the heart of Downtown Los Angeles, with over 40 years industry experience, Diamond Wish is the premiere supplier of custom engagement rings and one-of-a kind fine diamond and gemstone jewelry.

“What Makes a Machine Intelligent?” A Research Profile of Kilian Weinberger

A decade ago, computer networks were often built out of proprietary hardware and software components—controlled by vendors and therefore closed for innovation. As John Markoff noted in a New York Times article, computer programmers worried about the negative impact on further progress in networking and started to push for increased...

A decade after publishing “Finding Deceptive Opinion Spam by Any Stretch of the Imagination," Claire Cardie, Professor in...

Tianze Shi, a doctoral candidate in the Department of Computer Science, and his advisor, Lillian Lee, Charles Roy Davis Professor...

Most Cited Paper from CSCW in the Past Five Years by Justin Cheng, Ph.D. '17 and Fellow Researchers